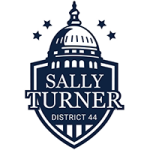 Sally Turner is now the newest member of the Illinois Senate after being appointed over the weekend by the Republican County Chairs of Logan, McLean, Menard, Sangamon and Tazewell Counties. She fills the empty seat in the 44th Senate District left by former State Senator Bill Brady (R-Bloomington), who announced his retirement last month.

“It’s a true honor and privilege to have been selected to serve and represent the people of Central Illinois,” said Senator Turner. “I am humbled by the unanimous decision of the county chairs and I will work at this new position with the same diligence and passion as during my 24 years as the Logan County Clerk.”

“Sen. Turner has spent her career working to make the government of Logan County more responsible, transparent, and effective,” Leader McConchie said. “I look forward to working with her to help promote legislation that focuses on those same qualities here at the state capitol.”

As a University of Illinois graduate of Legal Studies and Master’s Degree recipient in Organizational Leadership from Lincoln Christian University, Sen. Turner went on to become a juvenile probation officer before serving six years as a paralegal in the Office of the Logan County State’s Attorney. Her public service career began in 1994, when she was elected as Logan County Clerk followed by five more consecutive re-elections.

Sen. Turner said it’s those experiences as well as an extensive leadership role in the Illinois County Clerk’s and Recorder’s Association that will aid her in making a positive difference in state government.

“My focus is to bring financial stability and economic growth to Illinois by fighting for lower taxes, balanced budgets and smarter government,” said Sen. Turner. “While holding tight to my conservative values, I will work across the aisle to find common ground beneficial to the people I represent and the State of Illinois. I look forward to what we can accomplish in the General Assembly and will be a strong voice for the good, hard working people of the 44th District.”

A formal swearing-in ceremony will take place in the coming days.

Sen. Turner and her husband, John, live in rural Beason in Logan County and have two adult children.

Illinois’ 44th Senate District is in Central Illinois and includes all or parts of McLean, Menard, Logan, Tazewell, and Sangamon counties.